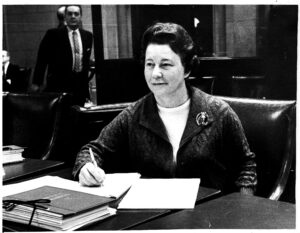 After graduating from Cornell Law School in 1943,  Constance Eberhardt Cook was one of the first women who worked in a New York City corporate law firm.  She went on to become confidential legal aid to Governor Thomas Dewey and then the legislative and administrative aide to Representative R. Ashbury from the 125th legislative district. Connie sought to assume Rep. Ashbury’s seat when he retired and although well qualified, found herself opposed by the local Republican Party.  Connie had to fight a four-way primary battle before facing a democratic opponent; she won the seat in 1962.

Cook was a pioneer in the political world and opposed common perceptions about women’s lives as she forged her career in the New York State Assembly. She represented Tompkins County when there were only two other women there. Using the political process, Connie composed legislation concerning broad-based public control of education and the decriminalization of abortion. Her efforts regarding abortion became the model for the rest of the country in the US Supreme Court decision Roe vs. Wade in 1973. 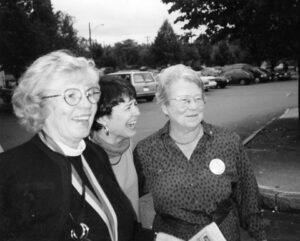 Connie Cook served in the New York State Assembly for 12 years from 1962-1974.  In 1976, she was named the first woman to serve as Vice President of Cornell University for Land Grant affairs.  In 1974 and in 1984  Connie ran for Congress and despite losing both times, her campaign was considered ground-breaking since she was the first woman to run for Congress in her district.  Among her many accomplishments, Connie was inducted into the Cornell University Athletic Hall of Fame in 1986 for her competition in fencing and hockey.  She joined True, Walsh and Miller law firm in 1987 and worked tirelessly as an attorney until she retired in 1992.  Connie Cook passed away in 2009, at the age of 89.

This 55-minute, interview-driven documentary includes a diverse cast of Cook’s family, friends, politicians and colleagues, along with archival footage of Cooks’ life and work. The film speaks to all ethnicities, age groups and economic backgrounds. Connie Cook was a pioneer in politics, and many changes that have occurred in American life have come about because of her drive, determination, and humanitarianism.

Cast in film in alphabetical order 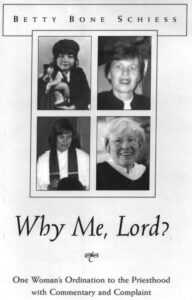 This project is made possible, in part, with funding from the Community Arts Partnership of Tompkins County